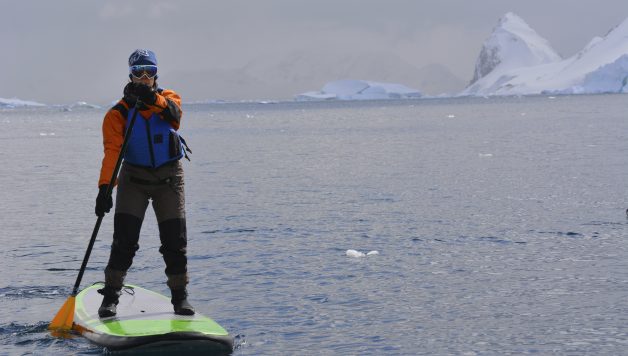 The 8:30 a.m. Antarctic air jolts us wide awake as we take a short Zodiac ride to a floating ice field in the Errera Channel. Our driver cuts the engine and seven of us—other millennials like myself from the U.S., Australia, Canada, and Italy—look around for Quark Expedition’s Ocean Endeavour. The comfy 199-passenger ice-strengthened ship looks like a tiny bath toy in the distance, making it a far swim should we fall in the 30º water.

While our borrowed drysuits keep water out and body heat in, our thermals, hats, gloves, and neoprene booties are all we’ve got for extra warmth. Not exactly survival gear for a polar plunge. As our expedition leader, a 20-something Californian with a surfer’s drawl, unloads boards into the frigid water, it sinks in that on this summer’s day in December, I will become one of the first people to stand-up paddleboard on the seventh continent.

That I’ve come to the edge of the earth to do this may seem a bit crazy. After all, it was only 200 years ago that man first set foot on Antarctica, and a mere 100 years since explorer Ernest Shackleton and his crew ended up on ice floes after their ship was crushed by pack ice en route to the South Pole.

“We’ve gone from extreme exploration to an experience that is available to everyone,” says British historian Huw Lewis-Jones, PhD, the former curator of the Scott Polar Research Institute in Cambridge. Lewis-Jones lectures us on the white continent throughout the 11-day voyage that includes a four-day round-trip from Argentina across the Drake Passage, the roughest waters on the planet.

“A hundred years ago, the world didn’t know what had happened to Shackleton. He had lost his ship, and his entire team was floating on sea ice,” says Lewis-Jones. “Today, we have the comfort and safety of modern technology, but there’s still a real challenge to be found here.”

Fortunately for us, our little exploration doesn’t end like Sir Ernest’s. It’s an exhilarating three hours, filled with impossibly cute Gentoo and Adelie penguins diving off cliffs and curiously swimming around or beneath our paddleboards to get a closer look. Thankfully, walruses, Weddell seals, and whales keep their distance, though there are plenty of skuas (predatory seabirds) flying overheard, enjoying our company along the jagged coastline of a barren island.

Gearing up for a night on the ice

As much as I love exploring the unspoiled beauty of this unique ecosystem while standing atop a paddleboard, it’s a more passive and horizontal activity—namely, sleep—that leaves the most lasting impression of Antarctica.

It is summer in the Southern hemisphere and the weather is fine: crisp, clear, and at about 35 degrees, relatively warm (I’ve seen colder days in NYC). So, naturally, a few dozen of us brave campers sign up to sleep on the Antarctic ice itself.

We happily, though nervously, swap our warm beds aboard the ship for borrowed bivy sacks (short for bivouac sack, a term I’d never heard until now) to cover and shield our sleeping bags from potential inclement weather, plus layers and layers of blankets, clothes, and accessories. Picture this: double pants, triple socks, quadruple tops, a thick balaclava, gloves, and a hat. Who needs a mattress when you practically are a walking mattress? Besides, I’m so exhausted from the morning’s adventure that I figure I could pass out on a rock, or in this case an ice cube.

When we step off the Zodiac to our campsite—the serene, otherworldly frozen landscape of Rongé Island—we are completely surrounded by white, save for the coastline where we arrive. The “toy boat” we came from is now completely out of sight, and all we have for miles and miles is snow and ice (90% of the planet’s supply). This is truly no man’s land, with no nation claiming ownership; the Antarctic Treaty of 1961 declared it a scientific preserve. As isolated and desolate as this place is, it’s still bustling with life: The skuas haven’t left us since this morning, plus there are undoubtedly penguins on nearby shores and seals sunbathing out on the ice and humpbacks somewhere in the deep.

Read the full essay on Saatva.com!