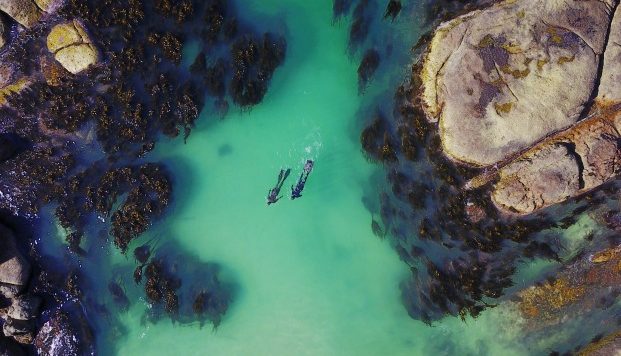 SHAPE MAGAZINE—Who knew that refusing to do something as natural as breathing could be a hidden talent? For some, it can even be life-changing. While studying in Sweden in 2000, Hanli Prinsloo, then 21, was introduced to freediving—the age-old art of swimming to great depths or distances and resurfacing in a single breath (no oxygen tanks allowed). Frigid fjord temps and a leaky wetsuit made her first-ever dive far from idyllic, but just serendipitous enough for her to discover a bizarre knack for holding her breath for really long. Amazingly long.

Upon dipping her toe in the sport, the South African was instantly hooked, especially when she learned that her lung capacity is six liters—as much as most men and higher than the average woman’s, which is closer to four. When not moving, she can go six minutes with no air—and not die. Try listening to the entire song “Like a Rolling Stone” by Bob Dylan in one inhale. Impossible, right? Not for Prinsloo.

Prinsloo went on to smash a total of 11 national records in six disciplines (her best dive being 207 feet with fins) during her decade-long career as a competitive freediver, which ended in 2012 when she decided to focus on her nonprofit, I AM WATER Foundation, in Cape Town.

Founded two years earlier, the nonprofit’s mission is to help kids and adults, particularly those from underprivileged coastal communities in South Africa, fall in love with the ocean and, ultimately, fight to preserve it. Fact is, climate change is real—as evidenced by Cape Town’s imminent water crisis. By 2019, it may become the world’s first major modern city to run out of municipal water. While H2O from the faucet is not equivalent to the beach kind, water conversation, on all levels, is crucial for our existence.

“The more I felt connected to the ocean, the more I saw how deeply disconnected most people are from it. Everybody loves staring at the sea, but it’s an on-the-surface appreciation. That lack of connection has resulted in us behaving in some pretty irresponsible ways to the ocean, because we can’t see the destruction,” says Prinsloo, now 39, whom I met in-person last July while visiting Cape Town as a guest of Extraordinary Journeys, the exclusive U.S. tour operator for I AM WATER Ocean Travel. Prinsloo co-founded this travel company in 2016 with her long-time partner, Peter Marshall, an American world champion swimmer, to support her nonprofit and share their enthusiasm about all things aquatic in a sustainable and responsible way.