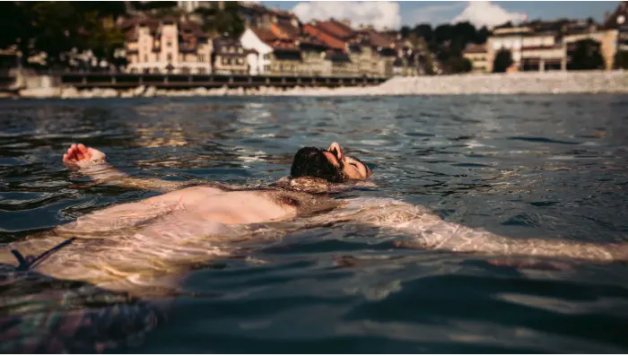 YOGA JOURNAL—Thousands of bare feet march on the paved and dirt paths along the Aare riverbank every summer in search of the perfect entry point into bright turquoise waters. The Aare River cuts through the heart of Bern, the well-groomed Swiss capital an hour’s train ride from Zurich. Last summer, I joined the hordes for a refreshing dip in the glacial melt coming from the Alps, despite having many nail-biting reservations. As peaceful and calming as the water looks and sounds, there’s no question I was entering a wild, unpredictable, fast-moving river with the sole purpose of letting myself get swept away. And in the past, getting “swept away” for me meant having to get rescued.

During a trip to New Zealand’s South Island with my sister in 2013, I naively trusted my white-water rafting guide (who, in hindsight, I believe was high) when he said it was safe to swim the rapids. I was the only one brave—or dumb—enough to body surf class III waves. I ended underneath our vessel, getting tossed around like gym socks in a washing machine. The guide assured the other six concerned passengers that he could feel me thrashing under the belly of the raft, and therefore, I was fine. I resurfaced unwounded but pale as a ghost, gasping for air, and covered in snot from forcefully trying to breathe.

On that same trip, there was a second incident that was just as dramatic. My sister and I capsized in three feet of freezing river water when our kayak hit a rock. Disoriented, frustrated, cold, and wet, I went after our runaway oar without thinking. My sister, Maria, yelled at me from shore, and by the time I turned to holler back, I realized I was chest-deep in a current so strong that I had no choice but to flip on my back (river safety rules 101) and helplessly float downriver until someone “saved” me. In this instance, I didn’t panic. Instead, I was so consumed with anger at both the river and my poor choices (ugh, not again) that I had a bitch face until I was fished out—maybe three minutes later—and for the rest of the day. Needless to say, in both instances, I walked away unhappy and slightly traumatized.

So, to just dive in to the Aare and intentionally get “taken” in the river—a mere five years after feeling so unsafe in wild waters—was terrifying. But I’m a Pisces, and I love being in water. So there was a big part of me ready to wash away my river angst for good.